Growing up, many children are told they must do well in school to be admitted to a good university and be successful. But, with shadow education, doing well in school is easier for families who can afford to pay.

Shadow education is structured, out-of-school activities that focus on students’ academic achievement in school. It is a market-based service where access often depends on parents’ ability to pay.

Jeongmin Ji, a doctoral student in Educational Measurement and Statistics, says that shadow education can

“Shadow education is popular in many countries because of the dissatisfaction with formal education or special needs for students who want to learn more than what is being taught in school,” says Ji.

In the United States, students may participate in test-prep courses to improve their ACT or SAT scores. Students are also participating in different extracurricular activities such as sports, art, and internships to strengthen their college applications. In some Asian countries, students may have entire supplementary curriculums created by private tutors or cram schools.

Jeongmin Ji presented her research on shadow education during the inaugural David Bills Memorial Lecture on April 6, 2022 with a presentation entitled, "The role of SES and academic composition of schools on students' participation in shadow education: The case study of four countries."

Brian An, professor in Higher Education and Student Affairs, whose research includes academic performance and college readiness, says that shadow education can be used to help mitigate the success gap in education.

However, shadow education often increases success gaps as programs are not always accessible for everyone, particularly in East Asian countries where shadow education is largely used for enrichment.

“Students in these countries often participate in shadow education to give themselves a competitive advantage over others in school and college admissions,” says An. “Because private companies run these programs, there are significant socioeconomic gaps in who participates in shadow education.”

One example of shadow education is private tutoring. Private tutoring is a $123 billion market and is only projected to grow in the midst of the COVID-19 pandemic, according to a report recently published on Globe Newswire.

An says that researchers estimate the average family spends up to 22% of its household income on private tutoring.

Educational inequalities do not stop at shadow education. It also extends to additional developmental activities that are only accessible to those who can afford it. This can include summer camps, out-of-school sports and music, and more.

One example of these inequalities is the accessibility of advanced placement (AP) courses. In 2021, only 23% of students who took an AP test were considered low income. While this is only a small fraction of test-takers, this number is still higher than previous years.

“In many societies, higher education is essential for an individual’s economic well-being. In some societies, obtaining the ‘best’ economic positions requires attending elite colleges and universities, making entrance to elite colleges a linchpin for social mobility,” says An. “These societies emphasize high-stakes entrance exams for college admittance. Participation in shadow education becomes even more important in these societies because students are finding ways to get a leg up on other students.”

“Equity is important for society because in many developed societies, where a person ends up is strongly determined by the family they were born into,” says An. “The mechanisms of how this happens have changed over time toward more merit-based means. But these merits strongly mask the powerful role of family background.”

Support for schools with fewer resources and families is key to the intentions to mitigate inequality, which is connected to broader educational bridges from education to work, says Ji.

Jeongmin Ji presented her research on shadow education during the inaugural David Bills Memorial Lecture on April 6, 2022 with a presentation entitled "The role of SES and academic composition of schools on students' participation in shadow education: The case study of four countries".

Originally from Daegu, South Korea, Ji became interested in educational policy studies after training as a secondary school teacher. She was drawn to the College of Education’s reputation and felt welcomed and supported by Bills.

“Because the University of Iowa is internationally known for its strong focus on research and diversity in the field of education, the university provides a great learning environment for the research I plan to do,” says Ji. “David Bills kindly answered all of my questions, and I believed I could learn a lot from his sociological perspectives.”

Ji’s research is broadly centered on individualized education experiences for students with different backgrounds where she focuses on the quantitative method approach for educational policy development.

Ji says that she was honored to present in the inaugural memorial lecture for her former academic advisor.

“The presentation was a memorable opportunity that reminded me of how Dr. Bills helped guide students in their research.,” says Ji. “He was a great mentor who always cared for his students. I was honored to share the research work that he assisted on and to share my memories of him in the memorial lecture for Dr. Bills.” 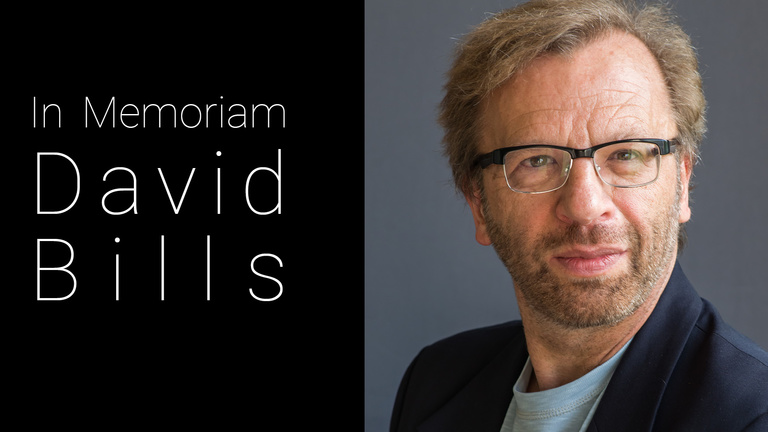 Thursday, January 6, 2022
David Bills, sociology of education professor and Emma E. Holmes Faculty Research Fellow in the Department of Educational Policy and Leadership Studies, died peacefully on July 15, 2021, at the age of 67, leaving a global legacy through his scholarship and students.