Vicki Cupp has found silver linings in a schoolyear filled with unknowns.

Cupp is a second grade teacher at Penn Elementary School in North Liberty. She initially began the year as an online teacher and moved to a hybrid schedule in the fall of 2020, working with two different groups of students who would each come for half of a week. 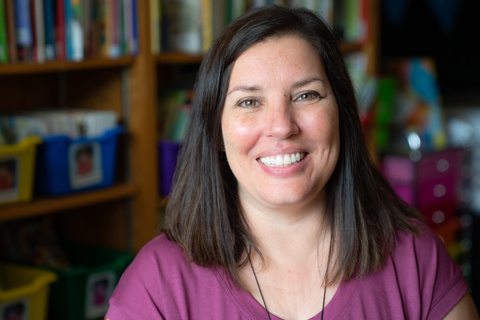 “It was a lot of on-the-fly and figuring out as you go,” says Cupp. “.It’s hard for teachers who are naturally planners, but more than anything we knew the kids needed it. They were so ready for normalcy, even though it wasn’t normal.”

Cupp says that while it was difficult to plan and make sure her students were on the same page, hybrid learning wasn’t without its advantages.

“Naturally, students are different from each other so the two groups were not moving along at the same pace. We had to keep them all at the right spot so when we did all come back together, we could all be in the same place,” says Cupp. “There were some great silver linings in the hybrid. You had half of the number of students you would normally have, which was really good for relationship building and curriculum instruction.”

Cupp has been a teacher for five years. As an undergraduate at Iowa State University she majored in journalism and public relations, but knew education was the right career for her. She vowed to return to school one day to become a teacher. After raising her family, she fulfilled that promise, earning a post-baccalaureate teacher licensure in Elementary Education from the University of Iowa College of Education.

In the spring of 2021, she returned to teaching fully in-person. She says that it felt like there were three different beginnings to the school year – one remote, one hybrid, and one in-person.

“It was kind of a new start because the dynamic changes. When we went from hybrid to in-person we are mixing two groups who have been learning independently. It took time to mesh,” says Cupp.”

Cupp says that even at a young age, her students were ready to do whatever was necessary to stay in the classroom.

“The students were amazing. They would police each other and try to keep each other safe. I never had to say much because they did it themselves, it was pretty remarkable. They had the big picture of this is what we have to do to be here together,” says Cupp. “I can’t tell you the number of times I went home to my family and said ‘These seven and eight year olds are wearing masks and social distancing perfectly, why can’t adults figure it out?’,” says Cupp.

She also built a strong bond with this class of students.

“There was an unspoken connection that happened with this class of students. It is always hard to say goodbye at the end of the year, but this year was especially hard,” says Cupp. “We were all in this super weird time, and we were doing it together and had a common goal.”

Cupp says that she felt support and encouragement from her fellow teachers and her school district in a year no one could have prepared for.

“This year, more was asked from us than ever, and we didn’t necessarily feel equipped,” says Cupp. “It was amazing how teachers stepped up. We wanted to step up for our students and that is the heart of teachers.”