Varon inspires other veterans through Troops to Teachers

Elementary Education major pursues career as a teacher after serving in the U.S. Marine Corps

Elias Varon’s life journey makes him the perfect representative for the Troops to Teachers (TTT) program in the University of Iowa College of Education.

Varon, 25, made the transition himself from the Marines to teaching. He is currently a student in the Teacher Education Program, pursuing a major in elementary education.

Veterans bring many natural strengths to the field of education, Varon says, and he’s proud to serve in this role to help other veterans consider teaching as a career.

“The lifestyle of teachers and military personnel have a lot of differences and similarities,” Varon says. “Many people see the differences, but the similarities tend to go unnoticed.”

Those similarities include leadership and organizational skills, adaptability, tenacity, and a commitment to help and serve others, just to name a few.

“Organizational and preparatory skills will go the distance in a classroom. Also being able to adapt and overcome the obstacles are a key requirement of working in the military,” Varon says. “I believe if veterans could look at the job of a teacher like any other operational job in the military, they would see how veterans can make great educators.”

In addition to completing his student teaching at the West Branch Middle School this fall, Varon says he enjoys serving as the Troops to Teachers representative as part of I-SERVE, or Iowa Supports Education and Resources for Veterans and Enlisted, in the UI College of Education.

In this role, Varon reaches out to veterans who are interested in education and explain the benefits available to veteran educators. He is working remotely this semester, but veterans who are interested in a career in education can visit the I-SERVE website or email him at iserve@uiowa.edu. Troops to Teachers and I-SERVE are located in the Dr. Paul D. Larson I-SERVE office in the Baker Teacher Leader Center in North Lindquist.

Troops to Teachers is a national program established in 1993 to assist transitioning service members and veterans in beginning new careers as K-12 school teachers in public, charter, and Bureau of Indian Affairs schools. The program provides career counseling and referral services for participants to help them meet education and licensing requirements to teach and subsequently helps them secure a teaching position. Since 1993, more than 100,000 veterans have successfully transitioned to a career in education.

TTT also provides support for veterans to pursue careers in education beyond becoming a teacher. This includes all school personnel such as school counselors, school psychologists, and educational administrators.

TTT has a contract with the University of Iowa through the College of Education’s I-SERVE office to provide Troops to Teachers services in Iowa for potential teachers in Iowa and Missouri. In addition to Varon, the TTT team includes Laura Boddicker, a Navy veteran. The TTT program aims to help relieve teacher shortages in high-needs subject areas such as math, science, and special education, as well as help military personnel make successful transitions to second careers in teaching.

Varon will also be working with UI College of Education alumnus George Anderson, last year’s Iowa Department of Education’s Teacher of the Year and a veteran, to help recruit more veterans to the field of education.

While the title of the program focuses on teachers, according to Vilia Tarvydas, UI College of Education professor emerita, many veterans are also enrolled in the college’s top-ranked graduate programs, including Rehabilitation and Counselor Education, Higher Education and Student Affairs, and Counseling Psychology, as well as the No. 1 ranked Teacher Education Program in the state of Iowa.

Varon is one of 51 student veterans and military-connected students currently enrolled in the College of Education. 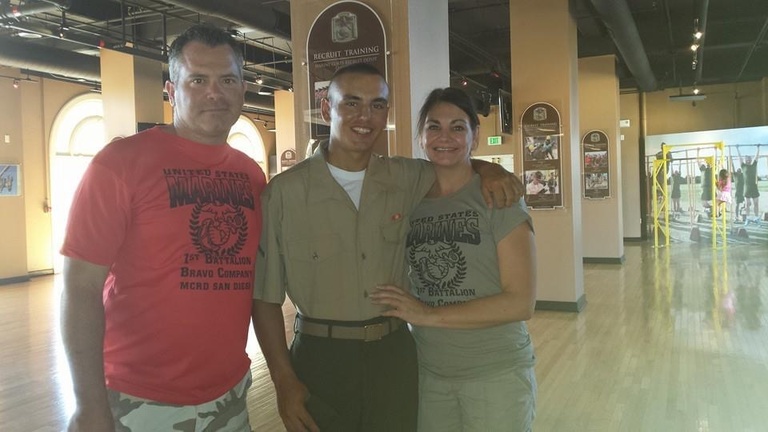 Elias Varon, center, spends time with his mom and a family friend at the Marine Corps Museum in San Diego.

He first became interested in serving in the Marines in his early years of high school in the greater Chicago-land area after he began speaking with a recruiter.

“I wasn’t sure what I wanted to do, and the military appealed to me because of the sense of adventure and the opportunity to travel as well as earn money for college,” says Varon.

After graduation from Matea Valley High School in Aurora, Illinois, Varon served in the Marines from 2014 to 2017, joining as a private and leaving as a Lance Corporal. During his tenure, he served in Georgia as a Marine Corps Security Force (MCSF) Guard, providing security for the base.

His decision to attend the University of Iowa grew out of a familiarity with the UI campus because his girlfriend was a Hawkeye soccer player.

“I enjoyed every visit to the University of Iowa. The campus had a sense of community that I didn’t see at other schools,” Varon says. “I decided to apply to the College of Education because some of my biggest influences were teachers when I was young. Having the chance to be a positive role model isn’t specific to teaching, but teaching is a profession that allows for a lot of those chances from my perspective.”

His decision to pursue a career in education was further fueled by an interest in environmental science.

“As I went through the program, I shifted my interest to science education instead of scientific research,” Varon says. “My professor Ted Neal really solidified my interest in education when he held a lecture about lunar phases. It really made me consider the importance of a meaningful education.”

In his Troops to Teachers role, Varon says he encourages those who are interested to first volunteer in a classroom a few days a week.

“I encourage them to try to get to know the students they work with. If they come back later and say they look forward to their volunteering every week, I would tell them to pursue education,” Varon says. “I hope to help people who might want to be educators pursue their goals. I have no interest in selling people on the idea that being a teacher is what they must do, but I do think it’s an option more veterans should consider.”

Though Varon does not have a specific geographic location in mind to teach after he graduates, he does know he’s made the right decision about his future.

“My only career plan is to be someone students can look back at years later and say that I’ve made a positive difference in their life,” Varon says. “I hope that during my career in education, I can help veterans think about being an educator. Working with students can be a great way to continue serving communities after they exit the military.”