Sean Baylor grew up in Los Angeles, California facing obstacles that to many seemed impossible to overcome. His family lived in poverty, where surviving crime and violence could be considered an accomplishment.

Fortunately, his mother envisioned a better life for her children. She may not have known what the future held, but she made certain that Baylor had access to a quality education. She expected him to do well in school and emphasized that the only way to a better life was through an education.

He worked hard and was awarded a scholarship to the University of Iowa. The road ahead was uncertain, and Iowa was a stark contrast to the streets of Los Angeles. His mother put him on a bus and sent him on a path that would ultimately lead him to a college degree in education.

Fast-forward some three-plus decades later, and Baylor, a University of Iowa alumnus and associate principal at Franklin Middle School in Cedar Rapids, was selected as the 2019-20 Iowa Assistant Secondary Principal of the year by the School Administrators of Iowa.

Baylor, of West Branch, Iowa, graduated from the University of Iowa College of Education in 1996 with a Bachelor of Science in Elementary Education. His career began in early education as a fourth-grade teacher at Grant Wood Elementary in Cedar Rapids, Iowa.

His experience as a child directed him to teach the importance of education to students at an early age. His intent was to be a positive role model for those who may have been experiencing struggles similar to his own.

“Kids need to see more positive minority role models in the education system, and not just on TV as athletes or performers,” Baylor says. “They need to see someone who looks like them, achieving in their own setting or environment.”

Baylor believes his time at the College of Education helped him learn a lot about the communities and cultures he had experienced growing up. He gives credit to the many mentors who saw potential in him and helped set him up for success. Through their encouragement and compassion, he gained insight into the experiences of all youth. He felt compelled to provide a glimpse into what is possible, particularly to those who might be struggling.

After six years at the elementary level, Baylor transitioned into a facilitator position at McKinley Middle School and returned to the University of Iowa to earn his Master of Arts in educational administration in 2007 in the Department of Educational Policy and Leadership Studies.

It was a difficult decision to leave teaching because he loved working in the classroom. After many conversations and encouragement from his mentor and building principal at the time, he decided that he would be able to impact more students, staff, and families in a positive way as an administrator.

Along with being able to impact the education system on a larger scale than just his classroom, Baylor went into administration because he wanted to be a positive role model for African American students.

“Across the district, state and country, our students of color are struggling in our schools,” Baylor says. “They need a person to say, ‘You can do whatever you want and achieve whatever you set out to achieve.’ They need a person who can say, ‘I understand and can identify,’ but also push and support them when needed.”

He has served as an associate principal at Franklin Middle School in Cedar Rapids, Iowa since 2007. 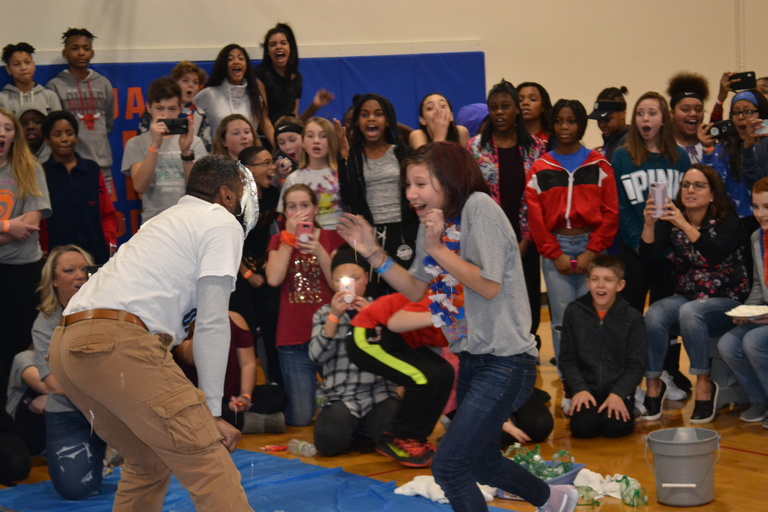 Sean Baylor gets a pie in the face as part of his school's Dance Marathon fundraiser.

“Since I’ve been [at Franklin Middle School], I have loved every day of coming to work. The experiences with the students, staff, and families are rewarding,” Baylor says. “We have made a lot of changes, and impacted kids and their families positively over my past 13 years here.”

Baylor hopes to be an example that students of color can look to and see themselves in a way that will demonstrate that it is possible to achieve whatever they set their minds to accomplishing. His aspiration to impact not only his students, but his school and their community, was just one of many reasons this successful administrator was selected for this statewide recognition.

Baylor’s passion for working with kids came from the experiences in his young life. In a place that he dared to dream of a brighter future, he never imagined the leader and mentor he would become to the youth he works with today.

“Here is what I say to kids and lived by, ‘It doesn't matter where you come from, what matters is the work you are willing to put in to accomplish your goals and reach your destination,’” Baylor says.