Students like Keishanique Moton-Tyler get the opportunity to jumpstart their college career. 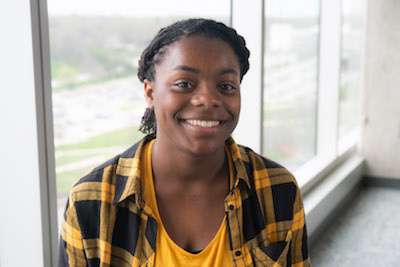 At just 18-years-old she has not only graduated high school but already completed two years at the University of Iowa.

Moton-Tyler, a civil engineering major in the UI College of Engineering, from Portland, Oregon, is one of 43 students currently enrolled in the Bucksbaum Early Entrance Academy, a program that allows exceptional high school students to enroll and study at the University of Iowa early.

Thirteen new students will be joining the academy this fall and the first student, from Cohort 1, recently graduated in May, 2019, in 3 years, at the age of 19 with a BS in Computer Science.

The academy is part of the Belin-Blank International Center for Gifted Education and Talent Development in the University of Iowa College of Education. This exceptional opportunity is the result of a $10 million gift from Mary Bucksbaum Scanlan and Patrick Scanlan to the Belin-Blank Center in early 2016.

When Moton-Tyler found out about the program from her high school teacher, she knew right away she wanted to apply.

“After I found out about the program, I knew it was the only thing I wanted to do,” Moton-Tyler says. “It meant everything to me to find out I had been accepted.”

At 16-years-old Moton-Tyler enrolled at the University of Iowa as a full-time student, living in Daum Residence Hall with other Bucksbaum Academy students, creating a supportive cohort.

Moton-Tyler says that the resources provided to her through the Belin-Blank Center helped make the transition easy. She will serve as a Bucksbaum Ambassador this fall and represent the program.

“Coming in through the academy, you get all the resources of the center itself,” Moton-Tyler says. “Everyone there is like a family and they want to help you succeed with all of your future endeavors. They were really helpful.”

Academy students have the full support of staff at the Belin-Blank Center. They have regular individual meetings with a staff member, and also meet as a group for a weekly seminar in their first and second years. In addition, students have opportunities to attend social events organized by the program.

Moton-Tyler graduated from high school earlier this year. While managing her engineering course load, she was also working to obtain her high school diploma.

“I was taking classes online while I was [at the University of Iowa]. It was rough at times,” Moton-Tyler says. “I was taking my normal 18 to sometimes 20 semester hour engineering classes and then I would have an online class to do for high school.”

When Moton-Tyler isn’t studying and attending classes, she can be found enjoying her time as a member of the UI’s women’s rugby club.

After completing her undergraduate degree, Moton-Tyler hopes to eventually attend graduate school. Moton-Tyler says that she wants to be a humanitarian engineer and live abroad when she’s older.

“When I first went into engineering, I knew I wanted to help people as a personal goal,” Moton-Tyler says. “That’s why I am interested in humanitarian engineering because I could see the direct impact it would have. Being able to create something from nothing and have it help people is super cool.”

The Martin and Melva Bucksbaum Early Entrance Academy for Science, Technology, Engineering, Arts, and Math was established in early 2016 through a $10 million gift from Mary Bucksbaum Scanlan and Patrick Scanlan. The academy was named in memory of Mary’s parents, Martin and Melva Bucksbaum.
The Bucksbaum Scanlan family has been a longtime supporter and donor of the University of Iowa College of Education.
“It is very special to be able to honor my parents, who also were dear friends of David and Connie Belin and Myron and Jacqueline Blank,” Mary Bucksbaum Scanlan said back in 2016. “Endowing this academy assures a bright future for talented students through the center’s transformative work with talented and gifted students.