Four University of Iowa alumni were honored with Inclusive Teaching Awards on Friday, June 28, at the Iowa City Public Library, in commemoration of the 65th anniversary of Brown v. Board of Education.

The awards recognize high school teachers for continuing the legacy of Brown in their classrooms.

Cheryl Brown Henderson, founding president of The Brown Foundation for Educational Equity, Excellence and Research and owner of Brown & 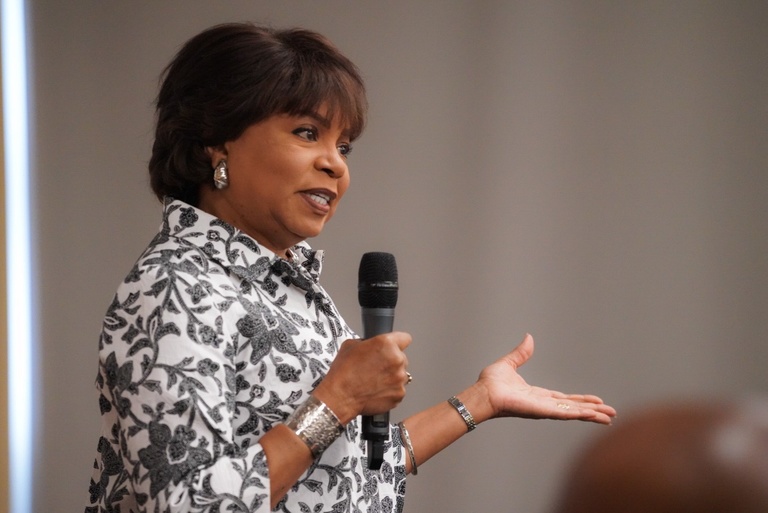 Associates, an educational consulting firm, gave a keynote address on the lasting impact of Brown v. Board of Education during the awards ceremony.

“Inclusive teaching allows students to bring to the classroom who they really are,” says Brown Henderson. “We are not trying to change our students. We are trying to listen to them.”

Brown Henderson is one of three daughters of the late Oliver L. Brown, one of 13 parents led by attorneys for the NAACP, who filed suit on behalf of their children against the local Board of Education in 1950 in Topeka, Kansas. Their case joined with cases from Delaware, South Carolina, Virginia, and Washington, D.C. on appeal to the U.S. Supreme Court, and on May 17, 1954, became known as the landmark decision – Brown v. the Board of Education of Topeka, Kansas. Oliver Brown died in 1961 before knowing the impact this case would have on the nation.

Since its establishment in 1988, the Brown Foundation has provided scholarships to more than 100 minority students, established libraries for children in low income communities, and sponsored programs on diversity and education issues for thousands of people.

“Education is about opportunity and education creates hope. Hope is something that everybody has a right to have,” says Brown Henderson.

This event was sponsored by the City of Iowa City Office of Equity and Human Rights with additional support from the following: UI College of Education, the UI College of Law, Student Legal Services, the UI Center for Human Rights, U of I Community Credit Union, and Iowa City UNESCO City of Literature.