Hitting it out of the ballpark

Born with cerebral palsy, no one thought Tanner Salinas would live. Twenty-four years later, Salinas is a college graduate, working at the Chicago Cubs.

“They said he wasn’t going to live, and then he ended up living. He wasn’t going to get out of a wheelchair, and now he walks. He was never going to drive or go to college. He was the one to stand up and persevere. Look at where he is at now,” says Debi Salinas, Tanner’s mother.

Cerebral palsy is a developmental disorder that can affect muscle movement, motor skills, speech development, and more. People with cerebral palsy may struggle to walk, talk, swallow, and breathe.

Thanks to graduating from UI REACH (Realizing Education and Career Hopes), Salinas landed his dream job with the Chicago Cubs as a Guest Services Ambassador, helping other people with disabilities navigate Wrigley Field, find their seats, and access the handicapped bathroom.

UI REACH is a two-year certificate program in the University of Iowa College of Education that integrates academic achievement, career development, student life, and transition to create a dynamic college experience for students with intellectual and learning disabilities. 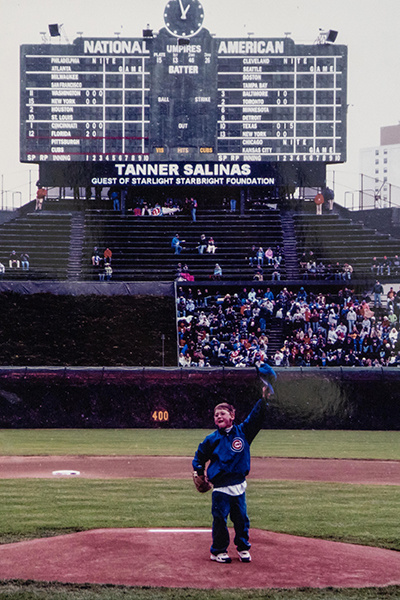 Salinas has loved the Cubs since he was a child. When Salinas was ten years old, he was granted a wish through the Starlight Foundation, a program that gives fun experiences to hospitalized children. His wish was to throw out the first pitch at a Chicago Cubs baseball game.

“After he threw the pitch, he stood on the mound and took his baseball hat off and waved to the crowd. The crowd was yelling and clapping. It was truly an amazing moment,” says Debi Salinas.

From a young age, Salinas was determined to live his life to the fullest, regardless of his disability.

“Tanner was a determined young man. He knew he had a disability, but he did not let that define him in any way,” says Deb Buchweitz, Salinas’s elementary school aid. “I just knew that he would somehow do great things. I always told his parents ‘Don’t ever put a cap on this child, he will surprise you’, and he most certainly has.”

In high school, he wanted to learn to drive and get his license, despite being told it would never be possible. After countless hours of practice, and three attempts at a driver’s test, Salinas passed the test and earned his license, along with a round of applause from the Department of Motor Vehicle employees.

“Dream big. Don’t limit yourself to where you are or what disability you have. It might be a harder journey, but don’t give up,” says Buchweitz.

UI REACH empowers students to become independent, teaching them how to cook and clean, live on their own, and important interview and job skills.

Because of the REACH program, Salinas was also able to have a typical college experience, going to Iowa football and basketball games, making new friends, enjoying downtown Iowa City, and even taking a trip to a local casino.

“To me, it didn’t really feel like I was in the REACH program. It felt like I was in college, doing what every normal college student does,” says Salinas.

UI REACH also provides an understanding community for parents who may have experienced social isolation because of their child’s disability.

“One person told me they could never have a child with a disability because of the social isolation,” says Debi Salinas.

Because of UI REACH, Debi and Dennis Salinas gained a network of friends who had children with disabilities and who had gone through similar experiences. 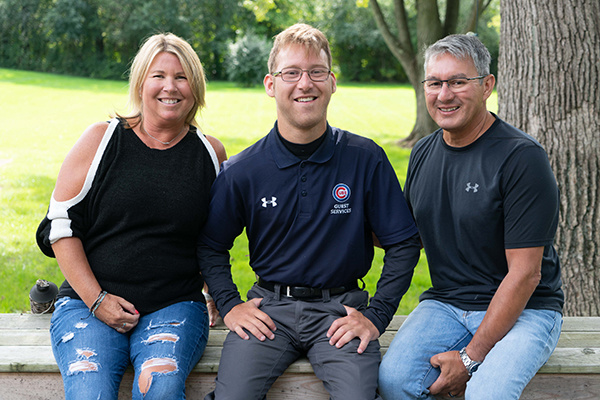 “REACH is not just for the kids, it’s for the parents too,” says Debi Salinas. “We have made some wonderful friends through the program. We all know how it feels.”

Guest Services Supervisor with the Chicago Cubs, helped Salinas land an interview with the organization. Once his elementary school aid, Buchweitz now works side-by-side with Salinas at Wrigley Field.

The Chicago Cubs place great importance on hiring people from all different backgrounds and abilities. Salinas is not the only person with a disability working for the organization, which gave him confidence in applying for a job with the Cubs.

“Every day when I walk into work at Wrigley, I think to myself ‘This is one of the coolest and most fun jobs and I love it so much’. I don’t act like it is a job, because I love it so much. I act like I am going to a Cubs game and getting paid for it,” says Salinas.

Salinas is grateful to his parents, who advocated for him throughout his life. Once told he would not survive, Salinas now lives on his own and commutes to Chicago for his dream job.

“My parents are the best parents ever. They did a lot for me. They fought for me when I was young and taught me what to do,” says Salinas. “Now, I take that into my own life, and I fight for myself. Yes, I do have a disability, but I never give up.”