The Sky is the Limit

For UI REACH graduate Andrew Sukup, the sky is the limit

The Sukup family, owners of Sukup Manufacturing Co., are known for their iconic grain bins that dot the Iowa landscape. You could also describe the family as die-hard Iowa State University fans.

Both Charles Sukup – the chief executive officer – of the Sheffield-based company and his brother, Steve – the chief financial officer – attended the school, along with their wives, Mary and Vicki, and several of their children. There’s even a family photo in the company’s main office with three generations of family members proudly wearing their red and gold.

Charles’ and Mary’s son Andrew, who has autism and learning disabilities, completed the UI REACH (Realizing Education and Career Hopes) Program in 2012. The two- to three-year certificate program for college students with disabilities prepares them to live independent and successful lives.

And for their family, Charles and Mary say REACH made all of the difference in the world. The program taught Andrew to be more confident and was an equalizer among their three children, Elizabeth, Andrew, and Jon.

“We took our youngest son to Iowa State on Wednesday and took Andrew to the University of Iowa the next day,” says proud mom Mary Sukup. “And when they both came home one weekend, it was so cool to see them interact. Jon is, well, Jon; he’s just a regular kid involved in all kinds of things, and Andrew has always seen him do things he couldn’t do.

“But that weekend, Jon would talk about things going on around campus and Andrew was right there with him … and it was a new level of relationship between the two of them. He was just a regular guy coming home for the weekend.”

Give now to the REACH Scholarship fund to support students like Andrew.

At first Andrew was hesitant to go to college – he had never been to Iowa City and it was scary, he says. But he soon fell into a comfortable pattern and they knew he was in a safe and supportive environment. Andrew learned to use the bus system, the importance of being on time, and how to use an ATM – something he’s now done more often than his parents.

“I liked living in the dorm room, going to football and basketball games – just living the college life,” he says.

He made friends with other REACH students and attended a Dairy Queen so frequently, that he was on a first-name basis with one of the employees.

“We enjoyed and miss our trips to Iowa City,” says Charles. “It was so special, taking him to ‘his place.’”

Meanwhile, Charles and Mary were able to connect with other families experiencing similar challenges and situations with special-needs young adults.

“You feel like you’re on your own little island,” says Mary. “REACH brings those islands together.” 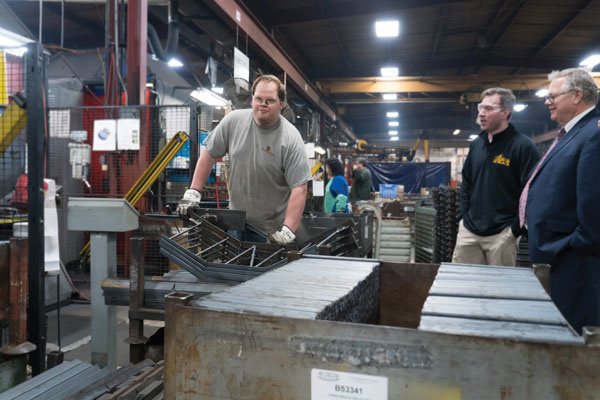 The skills Andrew learned at REACH have helped him be an independent adult.

“When students are in their second year at UI REACH, they participate in an internship in a career field of their choice,” says Brian Campbell, REACH senior program specialist and alumni liaison. “The soft and hard skills students develop at internships directly contributes to employability for UI REACH graduates. Eighty percent of our alums are working successfully and contributing to their communities.”

The 30-year-old now works for the family company, loading braces and rods into a robotic welder to make floor supports. When he was younger, his grandfather, Eugene, taught him to weld.

Eugene founded Sukup Manufacturing in 1963. Charles became president in 1995 and now runs it with his brother.

The company – headquartered in the tiny 1,200-person town located in north central Iowa – employs 600 people. Charles walks throughout the plant, greeting all of his employees by first name. His father made a point of attending weddings, graduations and funerals, he says, and taught him the importance of maintaining strong relationships with employees and dealers.

They’re a family of strong morals and a strong faith. Andrew was diagnosed with a pervasive developmental disorder when he was three years old.

“They sat us down in a room, and I’ll never forget they have a table there with a box of Kleenex,” says Charles. “And they say, we have to face reality – he may never go to a regular school, he’ll never play sports, he might not talk, and we have to accept it.”

But Mary says a pastor at the time reminded them about the grace of God.

“We didn't know what the future would hold,” she says. “Andrew is 30 years old, he continues to learn, he has an unbelievable vocabulary.”

“We see continued growth and development – and it brings us joy and blessing,” Charles adds.

The Sukups say despite raising a special-needs child in a small town, they had a supportive and inclusive public education experience. But Mary, a former teacher and member of the West Fork School Board, says that support abruptly ends when a child turns 18.

“There’s just nothing,” she says. “We didn’t know what to do or where to go.”

That’s why they’re so thankful for UI REACH – a program that watches out for young adults while also pushing and stretching them. Andrew now owns his own home, pays his own bills, and drives to work every day.

“Don’t sell your child short. They’re all individuals and the sky is the limit – it just may not be the sky we have in our original dreams,” says Mary. “When I pray for my kids, I always pray that they be happy, healthy, contributing adults. REACH has been a big answer to that prayer.”

Read more of the College of Education's 2018 Alumni magazine.