The University of Iowa College of Education graduate raised five kids and had a demanding administration job in the College of Medicine’s Department of Preventive Medicine College of Public Health. Now she had more free time to volunteer and contribute her talents to the community.

After reading about a recently formed group filled with “chronologically gifted” musicians – the New Horizons Band -- she dusted off her trumpet – which she hadn’t played since high school – and went down to the Iowa City Senior Center to check it out.

“I thought ‘If they’re playing three blind mice,’” says Wombacher, 80. To her relief, and a bit to her surprise, the band was quite good. “I joined the band in 1996, about six to eight months after it started, and have been playing ever since.”

Reigniting that passion for music is exactly what professor Roy Ernst at the Eastman School of Music in Rochester, New York wanted to do back in 1991 when he created the first New Horizons Band. The idea was simple: give seniors – those who have never played and those who want to reacquaint themselves – an entry point to making music.

The Iowa City New Horizons Band was formed shortly thereafter in 1995 by Don Coffman, former head of music education for the UI’s School of Music and College of Education.

Today, there are more than 200 New Horizons bands, orchestras, and choirs around the world and the Iowa City New Horizons Band has more than 70 members. Erin Wehr, assistant professor of music education, now directs the band program and some of the ensembles while music education students serve as conductors. These students receive scholarship funds from the New Horizons Program for their time and commitment to the program.

“It is a joy to direct such a dedicated and motivated group of musicians who give so much to our community and the college,” Wehr says. “This is also a valuable experiential learning environment for our music education students. The intergenerational aspect is rewarding, too.”

Many of these student conductors go on to successful music education careers in large and small communities across the state and nation, Wehr says, a testament to the impact and value of the program.

The New Horizons Band program is comprised of multiple bands and ensembles and gives more than 100 concerts throughout the community each year. Since there are rehearsals every week, the time dedicated to the program is impressive, Wehr adds.

“It’s fun to see the students grow and improve,” says Dick Caplan, a member since 1999, who plays the clarinet and piano. Caplan got his masters of arts from UI in piano and composition before earning his medical degree. “You just look at a kid like Trey (a student conductor) and see the difference in his performance as a conductor. He has blossomed.”

The 88-year-old retired UI Carver College of Medicine faculty member has played music since he was young – high school band is even how he met his wife. “Music is very important in my life,” he says.

The Iowa City band performs several concerts each year and has multiple ensembles that perform as well, including The Silver Swing Band, which performed at the 2017 College of Education homecoming tailgate.>

The band provides retired or widowed senior adults a chance to socialize, a support network, and a way to keep their minds sharp. If someone has a health issue, the band members bring them food and a card. If someone is unable to drive, they offer them rides to rehearsal.

“My favorite part is the people that I’ve met,” Wombacher says. “People look out for each other. … It brings together people who would never ever have met – someone who worked a service or support position is sitting next to a former dean, and they’re great friends.”

Give now to the Priscilla and Eugene Zimmermann Community Music Outreach Fund to support the New Horizons Band. 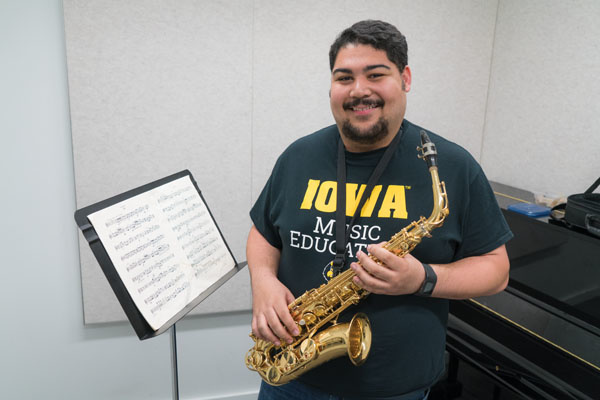 Tremere Hill’s conductor’s baton is more like a magic wand. It transfers his energy and spirit into each member of the Iowa City New Horizons Band – filled with Eastern Iowa’s more musically inclined senior citizens.

During a December concert the band played a medley of Ray Charles music – the tempo was fast and the piece was a challenge. When Hill and the band pulled it off, you could see the excitement on all of their faces.

But the fourth-year music education student didn’t always have the confidence to conduct.

“They share a lot of feedback with you,” says Trey, who receives scholarship funds through the Belin-Blank Center’s Iowa Talent Project and the Center for Diversity and Enrichment. “They come up after rehearsal and share things – a lot are former music teachers so you’re learning from them and they’re learning from you.”

Hill grew up in Cedar Rapids and went to Jefferson High School where he played in the band before attending the University of Iowa. And despite having a love for music – he plays the saxophone and was in the Hawkeye Marching Band and concert band – and knowing from a young age that he wanted to be a teacher, he didn’t settle on teaching music until he was a senior in high school.

“Playing music in the high school band was the first time I found my place,” he says. “I’ve always enjoyed making music and I wanted to share that sense of belonging with students.”

Hill has worked with New Horizons since the summer of 2016, and he says the experience has helped him be a better planner, have more effective rehearsals and be a leader. These are all skills that will come in handy when he begins student teaching.

Students are “in a follower position,” he explains, “someone is leading us for the vast majority of our lives. Now, we’re transitioning into being leaders.”

Read more of the College of Education's 2018 Alumni Magazine.