After 34 years at UI, Tim Ansley retiring in July 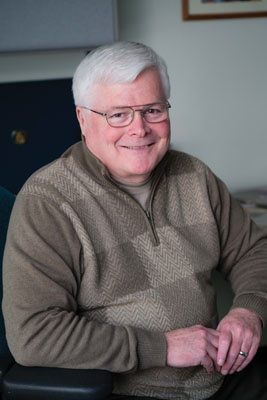 There’s a row of photos in the University of Iowa’s College of Nursing showing off past recipients of the school’s “distinguished friend of nursing” award. Iowa Sen. Chuck Grassley’s photo is there, as is Rep. Dave Loebsack and former Iowa Gov. Chet Culver.

And then there’s Tim Ansley, a professor in the College of Education, who’s spent more than 30 years helping demystify statistics for graduate students from every corner of campus.

Now, after 34 years of teaching, Ansley will retire at the end of July, though he plans to still teach an online statistics course “until the college kicks him out.” He’s looking forward to retirement and traveling with his wife, Marge, as well as visiting his six grandchildren.

But he’s going to miss getting to class at 8:30 a.m. – even on cold days – to teach, he says. Students come from dozens of different programs to take his statistics class, so he’s always worked hard to make things relevant to everyone.

“My goal as a teacher was to never be boring,” he says. “It may shock you, but the material can be a little dry, and the students are there because they’re required – so they aren’t the most willing. If I ever saw a student dose off, I didn’t get mad at the student, I got mad at myself.”

Ansley has served on more than 1,000 dissertation committees – a statistic he’s particularly proud of, because he loves to watch them work through their dissertation and start their professional lives.

“But I warn my students if they’re in my program or not, if I see an article they’ve written where they apply stats incorrectly, I’m going to contact them and remind them they weren’t trained at Iowa State, they were trained at Iowa, and that’s not how we do things here,” he jokes.

“I admire the heck out of people who can. But I thought what else is there?” he says. “Math is all I do. It’s the only thing I have an aptitude for.”

That’s around the time he found the University of Iowa – and he hasn’t left. He received his doctorate in measurement and statistics in 1984 and a job with the Iowa Testing Programs shortly after. He also found incredible mentors, including Bob Forsyth, H.D. Hoover, and Leonard Feldt.

“I could not have written a better script,” he says. “I get to do what I love to do – I love testing, I love statistics, but what I love most is teaching. That’s where my real passion always has been. I’ve had nothing but great times. Iowa is a great home and in our field, it’s hard to think of a place that’s better to land.”

He’s watched as the field of education and testing have changed over the years – moving from an information gathering technique to an accountability tool. State and federal budgets dedicate billions of dollars to education, he says, and the government should know what’s going on.

“The danger is, rules are made that are more political than educational sometimes,” he says. “I can’t imagine having to make those rules… but that’s changed the landscape.”

For the past 13 years, Ansley has been the department chair of Psychological and Quantitative Foundations – a job he never really wanted.

“As a professor growing up, I made fun of people who went down an administrative path – in a very professional, kind of way – but I thought why would you want to do that?” he says. “The idea was not appealing to me.”

But in 2005, several faculty members came to him and said “It’s your turn.” He soon found out that more than anything, the biggest job duty was helping people – a task he’s enjoyed immensely.

“Whether it was helping someone figure out ways to support a grad student or do a new project, it’s very rewarding” he explains. “My department is a very good group of people, really, I think the world of this group, and I always have. That’s a culture I walked into here, and I try not to screw it up.”

But the main sentiment he wants to get across after so many years, he says, is gratitude.

“It’s been a delightful ride.”

Read more of the College of Education's 2018 Alumni Magazine.