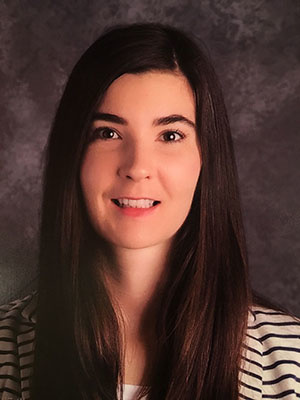 The Iowa World Language Association presented the 2017 Michael Oates Teacher of Promise Award to Elizabeth Schupp (MAT ’17), a German language teacher at Timberline School in Waukee, IA. This award is given annually to students in teacher training programs or in early stages of their careers who have shown exceptional promise and potential to become outstanding world language educators. Schupp accepted the award on October 13th during the 2017 Iowa World Language Association Annual Conference at the Des Moines Downtown Marriott.

Schupp studied music in Austria, taught English in Spain, and traveled extensively in Germany.  It is clear that in all of her travels, she was an ambassador for cross-cultural understanding and helping young people see the utility of learning languages.

“She is a proud advocate for the German language, and she has thought through many ways to help students and community members to see how relevant it is,” her nomination letter said. One of her colleagues said her influence at the school has made students start to use “Frau” to refer to many of their non-German teachers.  As a German teacher, she looks forward to, as she said in her statement, “a long career growing strong language programs and impacting students’ lives.”  We are lucky to have her in our community of language teachers in Iowa.

The Iowa World Language Association represents the more than 1,200 world language educators in the state from all levels of instruction and representing all languages. The association is devoted to advancing the worldwide mission of education and world languages, literature and culture by promoting the study of world languages and cultures; promoting language curricula from primary to post-secondary levels; enabling students to become proficient in the target language; and opening the doors for multilingual interaction with other cultures. More information can be found at www.iwla.net.