The two higher education institutions, separated by 5,262 miles, signed a memorandum of understanding on Wednesday, April 5, opening the door for many collaborative opportunities involving the UI College of Education.

Potential collaborations include education faculty assisting the Kosovo Ministry of Education with both pre- and in-service teacher training on their newly developed curriculum framework. Faculty and student exchanges between the two institutions may also take place. A delegation from the UI is planning to travel to Kosovo to conduct a needs assessment this fall.

Kosovo declared independence from Serbia in 2008 and is in need of developing a stronger curriculum for the students of this relatively new country.

The initial relationship between UI and Kosovo grew out of a collaboration between UI College of Law and the Kosovo Ministry of Foreign Affairs. Greg Hamot, a professor of social studies education in the College of Education, is also the associate director of the UI Center for Human Rights, which is housed in the College of Law. In his capacity at the center, he was able to develop a relationship with the Kosovo Consul General in Des Moines. From there, the ideas to collaborate on education programs came about.

“Over the past three decades, I’ve worked with many post-communist societies as they reorient their educational systems within a democratic framework,” says Hamot. “Kosovo is doing so right now, and the opportunity to work with them to achieve their goals just seemed like a natural fit for our college.”

On hand for the memorandum signing were Arsim Bajrami, Kosovo’s Minister of Education, Science, and Technology and Marjan Dema, president of the University of Pristina. Other guests for the signing included Kosovo Political Advisor Zenun Halili, Consul General of Kosovo General Xhavit Gashi, first secretary of the consulate of the Republic of Kosovo Arberie Shabani, and Executive Director of Iowa Sister States Kim Heidemann. 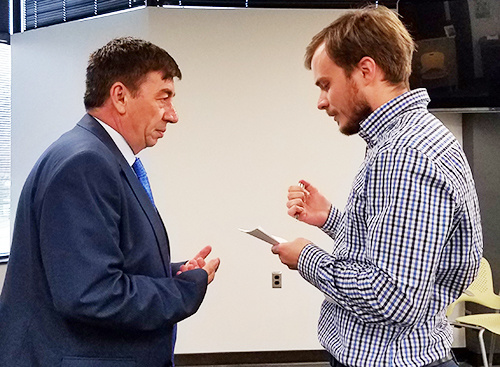 Berisha knows first-hand about the enriching educational environment found at the UI College of Education. Hamot says Berisha’s time as a graduate student in higher education and his deep knowledge of Kosovo’s educational system was invaluable in bringing the two entities together.

Berisha is studying at the UI College of Education as part of the Transformation and Leadership Program – Scholarships and Partnerships, or TLP-SP. This program, which is funded in part by the government of Kosovo and the U.S. State Department, aims to develop the abilities of Kosovars into those of leaders who can drive change in many areas of life in Kosovo including the economy, as well as in political and social areas. Berisha is enrolled in the Higher Education and Student Affairs master’s program at the UI College of Education, where he’s focused on the administration policy track.

Berisha says he feels very comfortable at the UI because of the sense of community among faculty and students. He likes the fact that everyone he interacts with is here to learn from one another. In particular, Berisha says he appreciates that there is an emphasis on the positive outcomes of diversity at the UI College of Education, calling this a “crucial” element to learning.

“All of these professors are very approachable,” says Berisha. “I really like the learning environment that takes place in class.”

Before coming to the UI College of Education, Berisha worked as campus coordinator for Universum College in Kosovo. He says researching and learning at the UI has given him the opportunity to learn the process of how to conduct impactful research. Berisha is part of a research group with Assistant Professor Jodi Linley, looking into the area of undergraduate peer socialization agents and diversity on campus.

He says things like defining the issues he’s studying and finding the best methods for gathering data have been very valuable to him, especially considering his career aspirations for the future.

“My career goal, when I go back to Kosovo, is to open an institute that will do research on higher education in Kosovo. I am interested to measure student learning outcomes, which then would inform leaders of college and universities, policymakers, and other stakeholders of how to design policies and programs intended to improve the learning environment on our college and university campuses,” explains Berisha, noting that this institute would also advocate for stronger college-level liberal arts education in Kosovo.

From here, his goal is to ensure that students in Kosovo will have an engaging educational experience that can increase their participation in politics to better their society as a whole.