Connecting with students in meaningful ways, despite language differences, is a valuable skill.

Henry Hartzler, of Byron, Minnesota, is an elementary education major at the University of Iowa College of Education who is also seeking an English as a second language endorsement. He knows the value of these connections first hand.

During the spring 2017 semester, Hartzler is student teaching in a dual language third-grade classroom in Aldine, Texas. He will also serve as an ESL teacher at an elementary school in Alajuela, Costa Rica.

“Developing rapport with every student and watching them try their very best because they know that you truly care about their education is the reason I teach,” says Hartzler. “The way that a student’s face brightens up when they understand a challenging concept for the first time is my favorite part of every day.”

Over the past three years at the UI College of Education, Hartzler says he has been mentored by Associate Professor Carolyn Colvin. She worked alongside Hartzler at a tutoring program in the West Liberty Community School District. Here, Hartzler tutored adults in the community who were learning English as their second language. 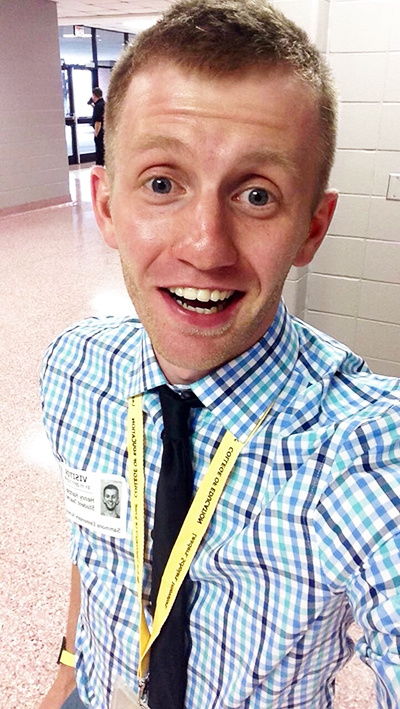 Hartzler is student teaching in a dual
language third-grade classroom in
Aldine, Texas.

Hartzler also had the opportunity to conduct research alongside Colvin, two other undergraduate students, and Associate Professor Lia Plakans during the summer of 2016. This research included developing a rubric for evaluating literacy materials for English language learners. This kind of faculty support has spurred Hartzler toward his goals, even before coming to UI.

“Spanish is my second language,” says Hartzler. “Growing up, I was fortunate enough to have enthusiastic teachers who ignited within me a love for language learning.”

Having the opportunity to work in classrooms from the very first semester he was enrolled at the UI College of Education was highly advantageous for Hartzler. He says the depth of experience in actual classrooms, along with the top-tier faculty supporting him along the way, ensures that his students’ learning is at the center of the instruction he receives at the college.

“The feedback from practicum supervisors as they have observed me teach has taught me to self-evaluate, which has been very helpful during this semester of student teaching as I am several states away,” says Hartzler.

On campus, Hartzler says the Linda R. Baker Teacher Leader Center has been an incredible resource over the past three years. He finds the space to be open and inviting, which encourages dialog with his fellow pre-service teachers about lesson planning and their own assignments. Hartzler also praised the many workshops held at the TLC, saying he was able to be introduced to concepts across the spectrum of education.

The opportunities Hartzler has taken advantage of at the UI College of Education don’t end there. He’s also served as a student ambassador, which had him serving on student panels where he was able to articulate thoughts about education and how the college has prepared him to teach. During his UI College of Education experience, Hartzler has participated in a number of practicums, including those at Grant Wood Elementary, Kirkwood Elementary, and Iowa City West High School.

After graduation this May, Hartzler will work at Tomahawk Scout Reservation in northern Wisconsin to serve as a rock climbing and whitewater kayaking guide until August. At that time, he’ll begin a 27-month Peace Corps assignment as an environmental education primary teacher in Nicaragua.