The best way to gain a global perspective isn’t always by reading a good book. Sometimes, it takes physical action to engage the mind and broaden one’s horizons.

At the beginning of November, hundreds of middle school students from around eastern Iowa attended the 20th Annual International Day at the Coralville Marriott Hotel and Conference Center. More than a dozen breakout sessions, many led by University of Iowa College of Education faculty and students, encompassed much of the morning. Although there were a lot of different activities taking place, they all fell under the umbrella of this year’s theme, “The Right to Rest and Leisure.”

Greg Hamot, professor of Social Studies Education and coordinator for the Office of International Students and Programs in the College of Education, plays an important role in organizing International Day each year. Hamot says the middle school students attending International Day are exposed to concepts about the world and the rights that come along with being human that they may not normally see, experience, or understand as members of their individual communities.

“By expanding their horizons through a variety of activities, the hopes is that all the students will return to their communities with a more comprehensive understanding of the human condition and what it actually means to be human, with all if its rights and responsibilities,” says Hamot.

International Day is also beneficial to the UI College of Education students who lead a number of the breakout sessions each year. Hamot notes that these preservice teachers have the chance to simultaneously work with middle school students that come from rural Iowa and urban centers such as Cedar Rapids.

“This opportunity to fashion a presentation that works with a wide ranging group of abilities and backgrounds is an excellent learning experience for them as they may end up in any of a number of classroom scenarios throughout their careers,” Hamot says. 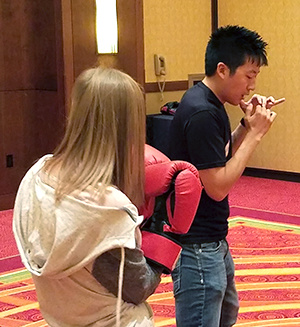 Adam Gallenberg, a graduate student in the Counseling Psychology program at the UI College of Education, led one of these breakout sessions called, “High Intensity Relaxation.” During this exercise, the middle-schoolers put on boxing gloves and learned some introductory fundamentals to the sport without landing any punches on one another. The students did, however, get a chance to hit the three adult leaders of the breakout session, who were equipped with safety padding.

“The goal of our simulation today was to focus on how high-intensity sports such as boxing and kickboxing and wrestling can be really relaxing for the body,” says Gallenberg. “So, we’re trying to incorporate how fundamentals in boxing can be really good for stress reduction.”

The idea here is that people are able to relax more effectively immediately following a high-intensity activity such as boxing.

“I think the group we had today really understood they were learning how to move their body correctly and more efficiently,” says Gallenberg, noting that these are concepts that work across genders. “They all learned the fundamentals and they could all really work together as a team when it came down to it.”

“We think that art is applicable to all areas and aspects of life,” explained Willms. “One of the goals of Art Education at the University of Iowa is learning how we can be connected in all disciplines. So, the lesson plans that we create are interdisciplinary.” 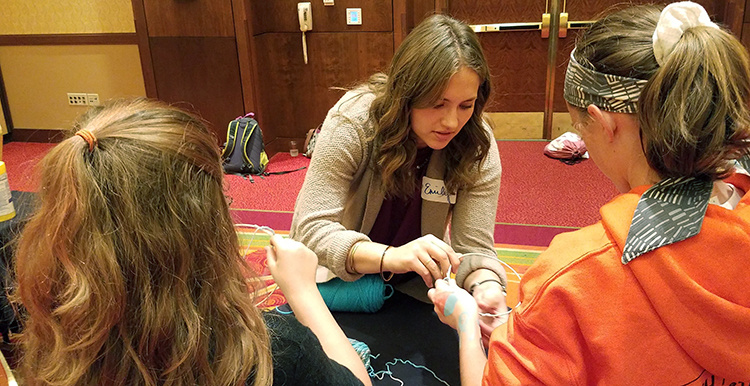 Brittney Wegener, a UI College of Education alumna now in her second year of teaching with the College Community School District in Cedar Rapids, brought 20 of her students to International Day.

“I think it’s a cool opportunity to talk with some people from the University of Iowa, learn from them, and also to think deeper about gender inequality,” says Wegener, a 2015 grad of the UI College of Education with a bachelor’s in Elementary Education with a reading endorsement.

Emilie Camp, an Elementary Education student at the UI College of Education, helped lead the breakout group, “Fearing the Wave,” which focused on the science of tsunamis, including how to recreate one in a classroom setting using rocks and a large tub of water. Middle school students in this breakout group also learned about how modern technology detects tsunamis.

“It was nice to be able to approach it in an interactive where kids are going to a bunch of different things,” says Camp. “I saw a lot more smiles on faces when they were doing things and it seemed like they had an interest and were invested in actually learning about it more than they would if we were just speaking at them.”

Over the past two decades, International Day has hosted over 5,000 Iowa students, according to Hamot. He hopes the impact it has includes not only exposing students to new ideas and views of the world, but also serves as a “multiplier” when students take these new ideas back to their respective schools. Hamot also hopes these ideas stick with students throughout their lives.