There was a time in Ali Heath’s life when she believed that living independently and attending college were unattainable goals.

Today, as a 27-year-old woman with intellectual disabilities, Heath lives on her own in Iowa City, holds a job she loves working as a preschool teacher, and is regularly involved in local theater productions. She attributes much of her full and rewarding life today to attending and graduating from the UI REACH program.

“THEY HELPED ME BE INDEPENDENT, THEY HELPED ME LEARN HOW TO TAKE CARE OF MYSELF, AND I THINK IT’S JUST A WONDERFUL PROGRAM TO BE PART OF.”
— ALI HEATH

“If I hadn’t gone to the UI REACH program, I probably wouldn’t be able to be on my own right now,” says Heath, a native of Iowa City. “They helped me be independent, they helped me learn how to take care of myself, and I think it’s just a wonderful program to be part of.”

The UI REACH Program is a two-year certificate program run by the College of Education for students with multiple intellectual, cognitive, and learning disabilities. Launched in the fall of 2008, UI REACH was one of the first programs of its kind at a major public university and attracts students from across the country.

The UI REACH philosophy focuses on helping students become independent and learn to make positive life choices, and this is certainly reflected in the lives of its graduates, including Heath.

Prior to attending UI REACH, Heath says that things many people may take for granted — getting up in the morning, taking the bus to and from work, cooking, and washing laundry — were a challenge for her.

UI REACH not only empowered Heath with the skills she needed to be successful in daily life, but it also set her up for professional achievement. 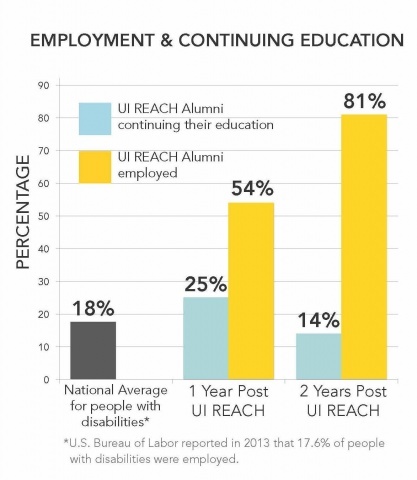 “Right after the UI REACH program, I got an internship in Des Moines,” Heath says. “I had this wonderful internship at Wellmark, and that helped me prepare for job interviews.”

In addition to providing the opportunity to work in operations at Wellmark and giving her many skills she needed to live as an independent adult, Heath’s mother, Sue Heath, says UI REACH also introduced her daughter to a supportive community of friends.

“She’s a very outgoing person, and a lot of that is because of UI REACH and the confidence it has given her,” says Sue, who attributes UI REACH to introducing her daughter to a whole social network that she wouldn’t otherwise have.

Today, Heath rooms with another UI REACH graduate, and she enjoys singing, acting, attending football games, and discussing the plot and characters of Star Wars with her boyfriend.

While the effects of UI REACH may be most evident in the lives of its students and graduates, the program has shown to be especially transformative for families. 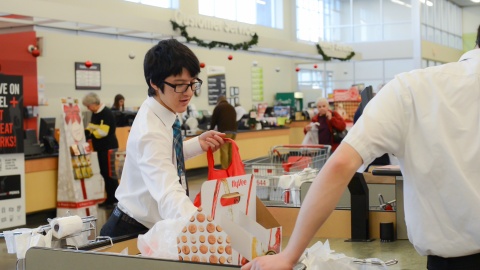 For many parents, it is a transition to go from being very involved in their child’s life, to watching them attend college and live among the UI REACH community. Darcy and Michael Lee of Fort Dodge, Iowa, whose son Elliot Lee is a graduate of UI REACH, say they had absolute faith and trust in the program’s faculty, and it allowed their whole family to step back and watch him become an independent adult.

“They looked after the students as if they were their own, we felt that everyone was secure and appropriately guided without having their hands held for every aspect,” Michael says.

"EVEN AFTER THE FIRST COUPLE OF MONTHS IN UI REACH, WE COULD TELL A DIFFERENCE IN HIS CONFIDENCE LEVEL."
— MICHAEL LEE

The Lee’s say that UI REACH’s incredible impact on the life of their son was apparent soon after he started the program.

“Prior to this program, I would comfortably say that I despaired that he would ever reach a point where we could actually be comfortable with him living in an apartment by himself or with another friend,” Michael says. “Even after the first couple of months in UI REACH, we could tell a difference in his confidence level and thought processes.”

UI REACH provides many families the opportunity for their children to lead fulfilling lives, that otherwise may not have been possible.

“It still makes me very emotional how much Ali has grown; I am thankful to UI REACH immensely,” says Sue, who explains that her daughter has accomplished much more than she ever anticipated. “As parents, you just need someone who can guide them as an adult, and UI REACH did a very nice job with that.”

“My goal for Ali has always been that by age 30 she’d be an independent person who will give to this community, her friends, and her work,” says Sue. “She’s 27, and because of the UI REACH program, I think we’ve accomplished that.”