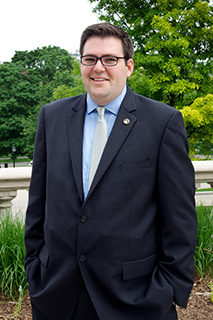 The University of Iowa selected Benjamin Gillig, a doctoral student in the College of Education’s Higher Education and Student Affairs program, recipient of its highest honor for students. Gillig, from San Francisco, won the Hancher-Finkbine award for his campus leadership, learning, and loyalty.

“Ben is a gifted and talented young scholar who is not only a self-starter, but who is on track to become a major scholar on college impact if he so chooses,” says Professor Ernest Pascarella. “Whatever choice Ben makes, he will be a distinguished representative of the University of Iowa.”

Aside from doing high-quality research that was published in the top journals of his field, Gillig also served as president to the Graduate and Professional Student Government (GPSG). He worked on topics such as legislative advocacy, sexual assault awareness, the tuition freeze, and workforce development that would result in instate job opportunities for graduates of all three Regent universities.

Gillig was also instrumental in convincing Governor Branstad to include a new College of Pharmacy building in the 2014 budget.

Don Letendre, dean of the College of Pharmacy, praised Gillig for his unwavering commitment. “It is very likely that it wouldn’t have happened without Ben’s leadership, persuasiveness, energy, and passion for the University of Iowa at large,” Letendre says.

Gillig always takes a stand to do the right thing for the most number of students. “Even when facing adversity, he held true to his convictions while remaining sensitive to others’ contrary feelings and perceptions,” College of Education Dean Nicholas Colangelo says.

“For Ben, leadership and loyalty blend together in a remarkable way,” say GPSG Vice President, Matt Enriquez. “There is no question that his leadership has driven our successes in student government. His commitment stems from loyalty to the University of Iowa.”